Calculating ROI on Predictive Analytics in the Process Industry

By 2020, the general approach to predictive analytics has matured. Plants have begun to apply predictive analytics solutions at scale across numerous plants, which demands careful attention to ROI. The value of operational excellence is widely acknowledged. However, calculating ROI for predictive analytics especially for undefined, non-repeating problems, is a challenge. We recently held a webinar explaining how we calculate predictive ROI on SAM GUARD in process plants. You can view the full webinar here.

Before we can begin to calculate ROI, we need to have some idea of what we want to achieve. For some plants, the main focus is on fighting failures. They need to cut their losses as much as possible, to make the plant more efficient and stop bleeding money on unnecessarily expensive replacements and last-minute repairs. They apply predictive analytics in the form of predictive maintenance (PdM), to help them prolong the lifetime of each expensive pump, valve, or turbine as much as possible and achieve OEE.In times of crisis, your instincts are to defend that which you already own. In process plants, this means using PdM to protect your existing equipment by spotting the earliest signs of anomalies that could indicate impending part failure. During the current pandemic, it’s fair to say that all plants are in that crisis mode. Cutting costs and improving efficiency are on every plant owner’s mind right now. Additionally, with so many maintenance teams working from a distance, managing skeleton crews, and/or only coming into the plant on a reduced schedule, it’s even more important to catch anomalies before they expand into urgent issues or expensive events.

However, for other plants, cost-cutting is less of a concern. These plants already have an effective preventive maintenance schedule and backup policies, and the merits of predictive maintenance have less appeal to them. For these plants, their primary concern is production. Plant managers want to avoid failures and produce as much as possible on the current equipment. Boosting production generates significantly more ROI than saving on maintenance, especially in today’s markets when most plants are heavily utilized. Under the unusual circumstances of COVID-19, plants need to keep an eye on both goals: cutting maintenance costs, and maximizing production at a time when the economy is uncertain.

Operational excellence is a key goal for process plants, and one of the biggest contributors to ROI. When your plant is operating flawlessly and smoothly, without unexpected shutdowns or uneven processes, it elevates production levels to new heights. Predictive analytics plays an important role in the journey to operational excellence.

How Can Predictive Analytics Improve Production?

Based on our experience working with dozens of process plants, we see several ways to improve production overall ROI:

These types of problems, like optimizing the control loops or repeating the golden batch, are generally much easier to resolve, and their ROI is pretty easy to calculate.

We see a lot of customers wanting to know when their most expensive piece of equipment will fail, but that happens so rarely that it’s almost impossible to calculate the ROI on their failure.

SAM GUARD’s focus is on the daily minor failures which have never happened in just this way before. We’re not talking about well-defined repeating events or major breakdowns, but the kind of blockages, failures, and other issues that occur on a regular basis in every process plant. Identifying these in advance requires looking at the entire plant, because you don’t know what’s going to hit you tomorrow. Fixing these daily problems before they escalate can have a significant cumulative effect on the plant’s production.

How NOT to Measure ROI in a Process Plant

Managers like to measure ROI by looking at KPIs such as plant utilization and plant availability. These are lagging indicators of output levels. At first glance, it seems that meeting or exceeding these KPIs is a clear indication of a successful predictive analytics application, and that failing to hit these KPIs shows poor ROI on the application.

In reality, things aren’t that simple, because there’s no way to be sure what would have happened if the predictive analytics system hadn’t been in use. There is no accurate baseline for comparison.

What’s more, there’s no way to be sure that a measured rise in production was definitely caused by actions taken as a result of alerts from the predictive analytics solution. Every plant carries out many activities to improve its workability and productivity, so it’s always possible that one of those activities had a bigger impact on production KPIs than the prediction of the analytics solution. When you calculate ROI, you need to be certain, you can’t base it on informed guesses.

The Correct Way to Calculate ROI

Instead of looking at these lagging KPIs, we measure ROI using what we call “direct indicators.” It means that we examine each event on its own merits by looking at signs that directly indicate the productivity of the system. We investigate the problem that was solved and ask “What would have happened if our predictive analytics solution hadn’t picked up on this event so early?”

Let’s look at an example:

Here’s a step-by-step overview of calculating ROI using this method. We use the example of a problem that SAM GUARD predictive analytics identified with the steam control valve in a process plant.

We ask the user what would the consequences have been if they hadn’t had SAM GUARD there to spot the event so early. The user comes up with a best case scenario, which might be that the plant engineer noticed the problem just a little bit later, so they lost two batches of production. We also ask for a worst case scenario, which could be where no one identified it early, and the plant lost eight batches before the problem was identified. This gives a range of ROI, from the minimum loss of two batches to the maximum loss of eight batches. For advanced users, we add exposure into the calculation. If the plant has ten steam control valves, we multiply the range of potential loss by ten to establish exposure.

This process gives us a reliable range of values for ROI on downtime cost, which is the cost to the plant if the valve broke completely and caused the plant to be closed.

We also add another component: maintenance cost. The maintenance cost reflects the possibility that even without SAM GUARD, someone could have spotted the problem before it caused the valve to break or the plant to close, so all that was needed was some maintenance work.

SAM GUARD aggregates the range of values for potential downtime cost, and the potential maintenance cost, into a dashboard that reveals the true ROI of using SAM GUARD. For example, in 2 months, SAM GUARD saved one plant between $140,000 and $4 million. Even the lower value of savings is far more than the price of SAM GUARD for the 2 months in question.

Considering the Cost of Effort

Finally, we consider how much effort it costs to apply the solution. Sure, ROI may be high, but if the solution demands a lot of effort from plant employees then that could undermine the financial savings.

Each time there is an alert, someone has to investigate it and think about what to do in response. This requires effort. If there are too many alerts each day, with many false positives, or even legitimate alerts but not requiring immediate action, the effort cost becomes too great.

SAM GUARD produces 1-5 alerts per day on average, flagging just the relevant alerts that require attention. When you set that against savings of between $140,000 and $4 million, the ROI is high and the effort cost is very low.

With SAM GUARD, the ROI is Clear

Preventing small, undefined, non-repeating events can have an enormous impact on production. Continuous improvements like these are what take process plants to the next level of availability, and by calculating the ROI the value can be proven. However this type of calculation can only be done by looking at direct indicators, not lagging KPIs. Calculating ROI on SAM GUARD reveals that the solution produces a great deal of value for a small amount of effort.

For more details and examples of calculating ROI on SAM GUARD in process plants, watch our webinar. 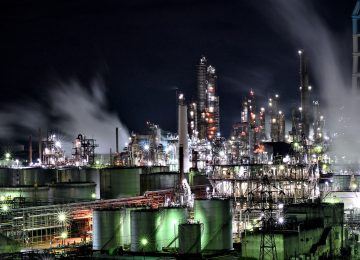 The types of digital twins used in process manufacturing

The use of digital twins in process manufacturing is rising rapidly, as…

The top IIoT trends that manufacturers are concerned about in 2022

The Smart Manufacturing Trends of 2022

Smart manufacturing is one of the buzzwords in industry in 2022, referring…